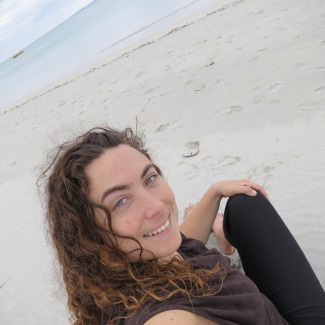 Born in Quebec, Jennifer completed her BA (honours) in Anthropology with a double major in Greek and Roman Studies at Memorial University in Newfoundland in 2003 and a Masters degree in Maritime Archaeology and History at Bristol University (UK) in 2004. Jennifer’s perspective is FROM the water and she has worked in many archaeological excavations underwater around the world in such regions as North America, Eastern and Western Europe, Oceania, Southeast Asia and Arabia. Jennifer’s MA research proposed a taphonomic chaine d’operatorie of shipwreck Site Formation Processes and tested this human-environment interaction with predictive models of French and British historic shipping on the Canadian Nova Scotian Shelf. Her PhD research was initially supervised by Damian Robinson with the Oxford Center for Maritime Archaeology, University of Oxford. She is now finalizing her PhD research at McGill University. This research studies the significance of beads archaeologically excavated from four shipwrecks within Philippines water and explores their role in connectivity. She addresses what it is about beads that can indicate connectivity, the analytical methods one can employ to compare underwater and terrestrial archaeology sites, and how these examinations challenge current models of complex society.

Prior to coming to McGill to complete her doctorate she interned at the Western Australia Maritime Museum, Department of Maritime Archaeology with the support of an Australian Endeavour Executive Award. At Oxford University she was awarded the Brasenose College Alumni Annual Fund, Santander Abbey Academic Travel Award and Meyerstein Academic Travel Grant. Along with these backings Jennifer’s research is possible with the in kind support of staff time and work space at the National Museum of the Philippines Directorship Jeremy Barns, Cultural Properties Department Angel Baptista, Archaeology Division Dr Mary Jane Bolunia, Underwater Unit Clyde Jago-on and staff, Records Section Nida Curvas and staff and Dr Eusebio Dizon and the Chemistry and Conservation Laboratory Mauro Alvarez.

Jennifer was the IOWC Newsletter Editor 2012-2018 and Underwater Archaeologist 2016-2018 at the Lake Champlain Maritime Museum (Vermont, USA). Outside of academia, Jennifer hikes and swims with her husband and daughter.

2014. With Carl Hughes. “The Southeast Asian Galleon Trade: a process towards a re-assessment of human-environment interaction”, in vol.1 Proceedings of the Asia-Pacific Regional Conference on Underwater Cultural Heritage, Honolulu: Electric Pencil. Available on the World Wide Web at: http://www.themua.org/collections/items/show/1602

2011. “Evidence of Gujarati in the Philippines: historical and archaeological sources of Sufi-Islam”, in Gujarat and the Sea, (ed) Lotika Varadarajan, Darshak Itihas Nidhi. Pp. 425-438.

2011. With Mark Staniforth, Clyde Jago-on and Bobby Orillaneda (eds). Proceedings for the Asia-Pacific Regional Conference on Underwater Cultural Heritage. UNESCO Patronage. Asian Academy of Heritage Management and the National Museum of the Philippines.

2012. ‘Navigation Tools analysis – what is required in an interpretive spreadsheet and how does that information transfer to an international database?’, conference presentation for The Dimensions of the Indian Ocean World Past: Sources and Opportunities for interdisciplinary work in Indian Ocean World History, 9th -19th c., Western Australian Maritime Museum.Perth, Australia. 12-14 November.

2010. “Gujarat port architecture in the 15th century”; presentation for the conference Gujarat and the Sea, sponsored by Darshak Itihas Nidhi., Oct 1-3. Invited.

The Appraising Risk Partnership is an international collaboration of scholars and researchers dedicated to exploring the critical role of climactic crisis in the past and future of the Indian Ocean World. With generous support from the Canadian Social Sciences and Humanities Research Council, the partnership seeks to create a comprehensive spatial and temporal database of human-environment interaction and interdependence during periods of climactic change.